People and societies as a whole have an instinctive nature of reinterpreting the facts, especially when looking at the economy directly around them. We ‘redefine’ prudence, overvaluations or undervaluations alongside manageable expectations even in the face of contradictory logic, mathematics, common sense and even historical precedence. Usually framed with the words “but it’s really different this time !”

Considering we are presently in the longest economic and somewhat anaemic expansion in modern history.

This anaemic expansion (since year 2010) has been driven predominately by an exponential growth in debt picture taken on by sovereign, corporate and private balance sheets globally ( see charts on page-3 ).

Can unproductive debt bubbles be classified as real GDP growth ?

The Central Bank Czars Dilemma – And Their New Impotency

Central banks attempted tightening interest rates in year 2018 caused a much sharper downturn, that they simply had not predicted. To hold the train on the rail-tracks they had to reverse policy quickly in 2019 with rate cuts (QE was also re-instigated in Europe in 2019), which is where we now find ourselves.

Central banks are now backed into a corner, they are also constrained by present legal mandates in terms of what can be held on their balance sheets. This is forcing their hand in becoming very vocal about the next stage of ‘policy makers & central planners’ mission to hold the ‘house of cards’ upright, namely government deficit spending.

“The Fed is really limited in what it can buy,” states economist Blanchflower.

The Federal Reserve is prohibited from purchasing any asset other than US Treasuries or guaranteed mortgage bonds. It has already heavily bloated its balance sheet in the last crisis. At the same time the Fed has just five interest rate cuts left to play with as of January 2020. Please bear in mind it actually required 20 rate cuts just as part of its overall ammunition in the last recession.

“I am seriously worried about the Fed’s policy space if the next recession is deep and nasty,” says David Wilcox, the Fed’s chief economist until mid-2018. “The European Central Bank is clearly in much worse shape, and so is the Bank of Japan.”

Growth cycles are driven by boom and bust cycles of credit expansion, with interest rates near zero or negative and credit outstanding in serious bubble territory, how do policy makers design policy around continued growth expansion?

Since the financial crisis of 2008, global debt has continued to rise. Total debt has increased by $72 trillion fully supported and driven by global central bank policies.

A report, released by the International Institute of Finance (IIF) in early November 2019 showed that total 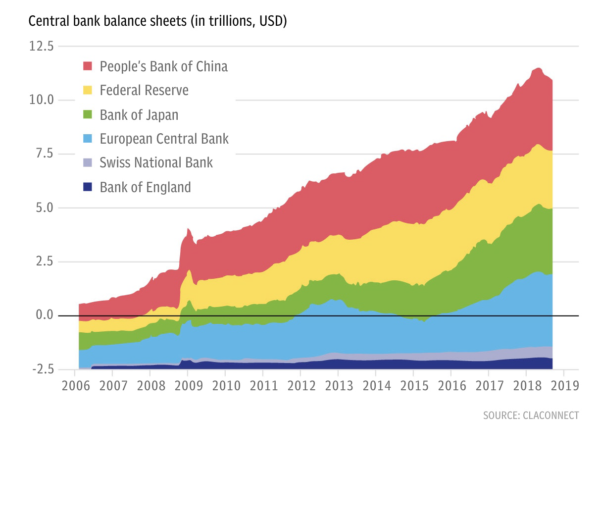 Quantitative Easing ‘QE’ has failed in invigorating solid sustainable roots of growth. It has however created bubbles in asset prices, and now a substantial and historical wealth division between the ‘haves’ (top 5%) and the ‘haves not’ by pushing up asset prices that only the ‘haves’ own. Alongside this they have pushed interest rates down to zero and into negative territory eroding the net interest margin of banks and crushing pension funds returns, creating huge funding shortfalls.

Pensioners will eventually discover that they are “junior creditors”. Their retirement income will be whittled down in real terms by disguised debt restructuring programs.

So, Central Bankers are coming to the end of their options. Cash and sovereign bonds have seen their structural integrity forcibly changed from investment vehicles into solely funding instruments. USA 10 year bonds are yielding 1.50% presently, with inflation where it stands bonds should be closer to 4.50% in a normal environment. This new structure does drive repercussions in value recognition as interest rates are mispriced, they are truly boxed in !

Fiscal Deficit Czars Are Upon Us

The Federal Reserve cannot go below zero interest rates for fear of damage to the US money market and pension fund industries, but this creates a vacuum of policy tools as they will be ineffectual in pulling down the long end of the yield curve to rescue the debt markets in a crisis.

Policy makers & central planners globally, alongside the ‘political class’ branches of reserve currency government states (read here western countries and Japan) understand that central banks in their current form are near complete policy exhaustion. With present economic malaise leading into the next downturn alongside asset bubbles and record debt, how do they fight a devastating downturn ?

Governments have already planned and publicly announced they will step squarely into the policy vacuum space left behind from the monetary exhaustion of central banks. The new orthodoxy of fiscal ‘deficit spending tsunamis’ governments believe they can step into the breach without undue consequences.

Criticism of these policies will initially be appeased or subdued by stating that by borrowing unlimited sums in perpetuity at near-zero cost will be that projects will be spent wisely on investment, with a rate of return higher than the rate of interest to be paid. Of course when has governments ever spent wisely ?

More importantly the sheer weight of debt globally and the rate of momentum to keep this ever-growing house of cards from being literally ‘blown over’ quite simply requires gargantuan perpetual deficit spending “Once more unto the breach, dear friends, once more”

With the new global ideology becoming fervently taken up under the title guise of ‘Modern Monetary Theory’, speeches and public statements are becoming common place ……… Olivier Blanchard, the IMF’s former

chief economist and High Priest of the fiscal followers stated last year during his lecture to the American Economic Association, in which he stimulated and galvanized his audience with a now famous one-liner: “put bluntly, public debt may have no fiscal cost”.

Wow that’s clever, but has this wheel-barrow excess of money printing not been tried before historically – you might be thinking ?

Politicians are simply salivating at the mouth on this one, a political dream finally come true for them!

Albert Edwards from Société Générale says the coming deflationary bust will be so frightening that central banks will in the end be forced to implement helicopter money by creating money for direct spending by governments.

“The response will politely be called ‘fiscal and monetary cooperation’ or ‘QE for the people’ and in a way, it is better than just spraying money at asset markets,” he says. “But once politicians get hold of this tool, they will never give it up.”

‘MMT’ – How Does It Work Exactly and What Are the Consequences ?

We have a global debt crisis, however with the full support of central banks our governments can unleash a ‘no limit’ on spending under the guise its producing higher returns than the present interest rates its borrowing at. However interest rates have been pushed abnormally low thereby giving false values to cash and also asset prices allowing them to compound the debt crisis.

Debt monetization is the financing of government operations by the central bank. Central banks will buy up unlimited amounts of newly issued sovereign debt that is directly issued from the government who in turn will instigate massive spending programs into the economy on multiple projects (some good, some great, majority however will be unproductive).

Whereas central bank QE was the purchase of debt from the financial industry at full face value (no valuation models used here folks) and in turn giving them cash deposits to buy up and turbo charge assets into bubbles to invigorate growth (feel richer plan).

Sovereign deficits as a percentage of GDP will explode higher and eventually in the height of crisis there will be debt devaluations (read here …eradicate) by subtle debt jubilees (debt forgiveness) between governments and central banks, the debt will be simply cancelled out.

For example at Davos in January 2020 many such individuals spoke alarmingly how this is going to affect all of us….

Ray Dalio while being interviewed, (see his video interview here), is talking about the fact that we have reached our limits within our present monetary system.

Cash cannot be held in hand or within the banks as governments are going to wholesale destroy the value of cash.

They ask “how do you protect yourself and invest then?” You have to understand this is a generational monetary phenomeum and you need to look out over the time horizon of the next 12 months to 3 years, ‘you need to hold a well balanced diversified portfolio of “hard” assets’ Dalio states (he also degenerates Bitcoin as any form of wealth asset).

The central pillar of your portfolio has to be gold and a balanced basket of precious metals.

Globally, central banks, governments, investment and high street banks and wealth managers are buying huge volumes of physical gold and precious metals as they understand exactly that a massive re-balancing of the monetary system is going to take place over the next few years, which incorporates currency  value  destruction resulting in a substantial revaluation of metals.

Our team of professional investment managers are on hand to help in advising you on your precious metal diversification requirements. A diversiﬁed well managed portfolio that is constantly being monitored on a daily basis by a team of investment professionals across a strong partnership of bullion and logistic companies collectively brought together into our company Auctus Metal Portfolios Pte Ltd is considered imperative for   our client base.

The information contained in this report and on our websites should be used as general information only. It does not take into account the particular circumstances, investment objectives and needs for investment of any investor, or purport to be comprehensive or constitute investment advice and should not be relied upon as such. You should consult a financial adviser to help you form your own opinion of the information, and on whether the information is suitable for your individual needs and aims as an investor. You should consult appropriate professional advisers on any legal, taxation and accounting implications before making an investment.