We Are Facing A Spectacular Perfect Storm In Precious Metals

But Especially In Platinum Group Metals 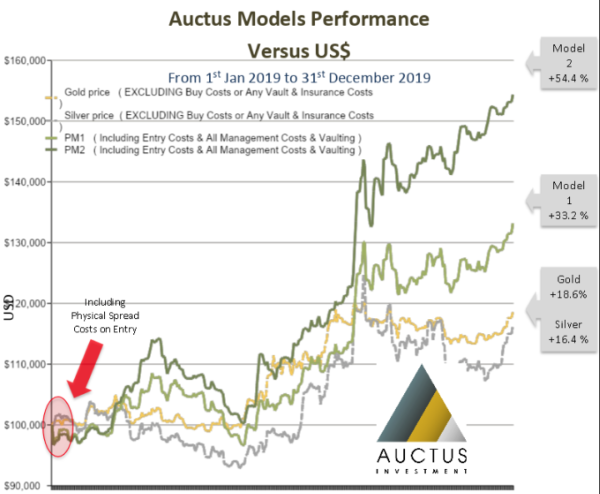 Our 2019 performance has yet again proven our portfolio management offering far outstripping the market.  All supported by physical holdings in our own client’s vaults.

These models are designed to give a very healthy positive (+Alpha) return over a 3 to 4 year period ‘over and above gold’s performance’. Although saying that we have walked into the perfect storm (which we have written about here) and we do expect returns on our models to stay elevated over the next few years.

South Africa’s mine production of PGM’s come from extremely deep mine shaft systems of several miles deep, six of the ten deepest mines in the world reside in a particular region of South Africa. These mine shafts at their most deep depths are superheated from replenishing magma, hence the classification as magma mines. The mineshafts demand huge amounts of machinery infrastructure and a 100% consistent electricity supply.  They are now directly affected by the energy crisis in South Africa, with regular mineshaft closures now commonplace.

2nd January Update : CAPE TOWN – As 2020 dawns in South Africa, energy experts are warning that load shedding (major energy cuts) will be with us for another five years at least for the country as a whole. Read here.

South African PGM supply was reduced by 50% as producers suspended operations. South African 5E PGM (platinum, palladium, rhodium, ruthenium, and iridium) mining capacity fell by almost a half in December after the escalation to Stage 6 load-shedding led to a one-day suspension of underground mining shifts. While load-shedding is not uncommon, it is the first time since 2008 that it has led to mine stoppages. However, a backlog of existing

concentrate stocks will minimise refined output losses for the year 2019, moving forward is a different picture.

Eskom is now a greater risk to South African PGM supply going forward. Eskom had previously considered Stage 4 the most extreme level of load-shedding; this is the first time in history that Stage 6 has been implemented. The escalation to Stage 6 represents a new level of threat to the industry.

National governments have found a new impetus for increased deficit spending even in the face of our global debt crisis, ignoring problems rarely solves them. You need to deal with them and not just the effects, but the underlying causes, or else they usually get worse – a lot worse.

As a quick bullet point overview of just some of the economic, macro and political conditions that will drive the gold and precious metal prices in 2020 and beyond. Investors and more importantly everyone should now be extremely aware of what is developing very quickly at this point …..

The year 2020 and beyond is shaping up to be the year that all semblance and consideration for paper money’s role as a store of value is abandoned. 2020 onwards could well be the recognised period when currencies begin to be visibly shattered in the hands of their long-suffering users and holders.

Please contact our specialist team at Goldstackers to discuss how you can protect your portfolio by adding precious metals to your portfolio.